"23 Things They Don't Tell You About Capitalism" 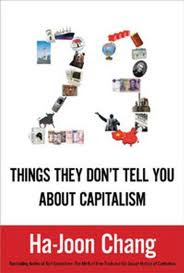 I bought this book by Cambridge economist Ha-Joon Chang a while back after reading some reviews online; with the paperback coming out in two weeks, we should see another round of comments soon. Written after the 2008 financial crisis, "23 Things" is a crisp read that hammers home its message that economics is about good policy, not using reverence to the free market to accept bad outcomes.

As a renewable-energy entrepreneur frustrated by our nation's lack of a plan to power itself while we continue to deplete our resource base AND spend billions buying from overseas, this book was a breath of fresh air. Our society isn't doing much to prevent the next financial crisis, either, but "23 Things" carefully places the blame in the proper place--with the policymakers rather than the free market to which many profess their devotion.

I've put together a selection of points from six of the "Things" that support my contention that the United States needs to get serious about domestic production of renewable energy equipment and capacity, using government policy to drive this production as quickly as possible:
Thing 1. There is no such thing as a free market
"Every market has some rules and boundaries that restrict freedom of choice. A market looks free only because we so unconditionally accept its underlying restrictions that we fail to see them." We accept that we aren't allowed to buy and sell human organs, unapproved drugs, or court decisions; other rules can be made to further policy goals, rather than simply accepting outcomes and crediting the "invisible hand".
Thing 7. Free-market policies rarely make poor countries rich
"With only a few exceptions, all of today's rich countries, including Britain and the US--the supposed homes of free trade and free market--have become rich through the combinations of protectionism, subsidies, and other policies that today they advise the developing countries to avoid." China's explosive economy, with all its government controls and restrictions, resembles the United States during its late-19th-century growth into the world's richest nation; we don't necessarily have to play by different rules today, and we certainly shouldn't force desperate countries in crisis to do so.
Thing 9. We do not live in a post-industrial age
"It looks as if we are spending ever higher shares of our income on services not because we are consuming ever more services in absolute terms but mainly because services are becoming more expensive in relative terms." We buy more goods than ever, but more rapid productivity growth in manufacturing means goods are also cheaper than ever; we can pretend that these goods are destined to made elsewhere, or we can work to retain our vital manufacturing sector.
Thing 12. Governments can pick winners
"Decisions that are good for individual firms may not be good for the national economy as a whole." Especially in East Asia, the development of heavy industry (which has succeeded at the expense of the United States) was driven by governments rather than private business; the narrower and shorter-term focus of American businesses mean they can't and won't compete.
Thing 17. More education in itself is not going to make a country richer
"What really matters in the determination of national prosperity is not the educational levels of individuals but the nation's ability to organize individuals into enterprises with high productivity." Even if every worker in America graduates from college, it won't matter if they all end up working in finance and health care while we buy goods made elsewhere.
Thing 19. Despite the fall of communism, we are still living in planned economies
"Modern capitalist economies are made up of large, hierarchical corporations that plan their activities in great detail.... Therefore, the question is not whether you plan or not. It is about planning the right things at the right level." No corporation would operate completely guided by fluctuating market prices, so we shouldn't expect society to do so either.

I wrote almost two years ago about the energy overhaul needed in the United States; with energy usage on the rise again and oil prices increasing, we need good policy more than ever.
Posted by Kevin Maas at 8:33 AM