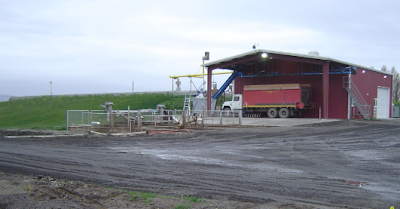 Well ahead of my once-a-year pace of writing about combined heat and power (CHP), it's already time for another blog posting on the subject. An updated combined heat and power database shows additions in Washington state during the past two years: a couple manure digesters and a small wastewater treatment plant started running engines on biogas, while a landfill is producing upgraded renewable natural gas and a paper mill now burns its waste for process heat and electricity.

Farm Power Rexville keeps running steadily, so not much news to add there. But manure-to-energy continues to be a favorite media topic: a cow-powered data center concept by Hewlett-Packard engineers got lots of attention. While the overall concept isn't news to us, the paper also described cooling with waste heat from engine-generators by "silica gel-water adsorption chillers" which "can be driven by near-ambient temperature heat." 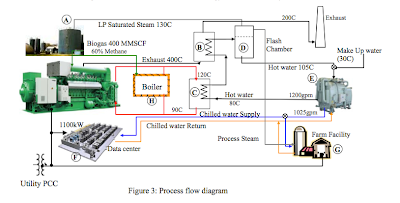 The diagram above shows an elegantly-integrated system capable of providing electricity, heat, and cooling at higher efficiency than anything else I've seen. A boiler allows optimizing of heat output or upgrading hot water to steam. Even if other renewable energy technologies struggle for traction as the era of stimulus draws to a close, the future of ever-smarter CHP gets brighter and brighter.
Posted by Kevin Maas at 1:52 PM 3 comments: 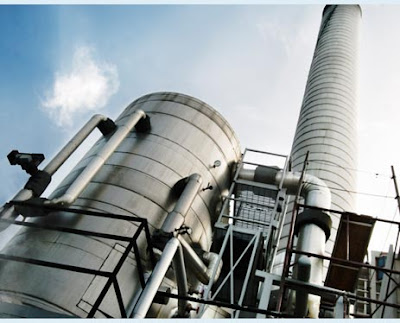 I recently heard Stan Gent of Seattle Steam speak about the importance of centralizing heat production, as his company does for buildings in downtown Seattle. One comment stuck with me: if we electrify transportation, we are doing something more important than just shifting emissions from millions of small exhaust pipes to a few bigger power plants--we are actually radically shifting waste heat from our highway to central locations where it can be put to use.

The concept of cogeneration--producing both electricity and usable heat--is not new; I wrote about it last year, mainly focusing on the decades-old practice of wood-products plants burning their waste for process heat and power. In the Northwest, such plants already produce as much renewable energy as the region's entire wind industry. However, I believe that vastly-more-widespread cogeneration must play an integral future role in increasing our efficiency--and sustainability. Combined heat and power (CHP) recovers 60-80% of the energy in its fuel; car engines run at only about 20% efficiency. At some point in the coming years, we will no longer have the luxury of wasting 80% of the energy we put into our fuel tanks.

Because CHP uses fuel so much more efficiently than typical power plants, the industry has begun calling it "clean heat and power", or when some of the heat runs an absorption chiller, "clean cooling, heat, and power". Even when burning natural gas rather than biomass, CHP is indeed one of the cleanest options in our energy portfolio. Imagine the effect if that sustainable electricity can be used to replace the combustion of diesel, gasoline, or even biofuel: moving all that heat off the highways, into businesses and even homes that need it, is exactly the kind of radical shift we need for the 21st century.
Posted by Kevin Maas at 3:31 PM 1 comment: