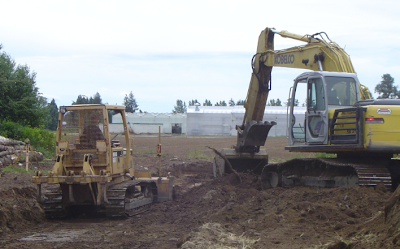 Excavation has finally begun on our second digester; nine months after Andgar completed our Rexville project, their team is going back to work on a similar but slightly bigger manure-to-energy plant. We celebrated this important step with a groundbreaking ceremony--almost a hundred farmers, community members, and supporters joined us at the site on a gray but pleasant afternoon.

After people had a chance to get some refreshments, we had a short program. Whatcom County Executive Pete Kremen spoke about the importance of agriculture; we were also joined by 42nd-District Representatives Kelli Linville and Doug Ericksen as well as Bellingham Mayor Dan Pike and Lynden Mayor Scott Korthuis. Our regional USDA Rural Development business program representative Sharon Exley talked about building the funding package for the project through the REAP program. Next, we emphasized the importance of Puget Sound Energy and its Green Power program both in our comments and those by PSE's Tom Maclean. Finally, we invited up a whole line of project partners and turned over some shovelfuls of earth! 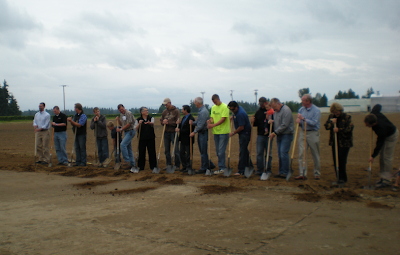 Whatcom Farm Friends added an event page for the groundbreaking to their project photo album--it already had greenhouse pictures, and Farm Friends will soon start adding construction photos. A reporter from the Bellingham Business Journal wrote a nice little story on the event, and other coverage included an article at the Biomass Magazine website as well as extensive re-printing of the press release from Puget Sound Energy.

We would like to extend our appreciation to everyone who helped us get to groundbreaking--it's taken two years, but the project is underway and very exciting! Stay tuned for further reports.
Posted by Kevin Maas at 7:07 PM No comments: 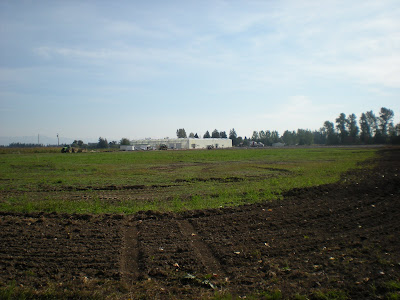 It's been almost two years since we started exploring manure-to-energy possibilities in Whatcom County, and about a year since we started committing money to a project. So we're thrilled to finally announce groundbreaking on the Farm Power Lynden digester--we'll be having a ceremony on Monday, June 28th at 2pm. The photo above looks from the corner of our site towards the greenhouse we'll be supplying with hot water. You can see what Whatcom Farm Friends wrote about the project in its most recent newsletter here; give us a call at (360) 424-4519 or drop us a note at farmpower (at) gmail.com for more details--everyone's invited to the event.
Posted by Kevin Maas at 9:10 PM No comments: