I wrote in an earlier post about the rising cost of coal; that market seems to have cooled off a bit in recent weeks, but then I saw an article from the Northwest Energy Coalition on the total cost of generating electricity from coal. Rapidly-rising prices for boilers, turbines, and other industrial equipment has driven up the fixed cost of large generating plants (those typically burning coal or uranium), as seen in the above chart drawn from the article. In comparison, the increase in wind turbine prices we've seen over the past several years hasn't had nearly as large of an impact on the cost of generating electricity from wind, since fixed maintenance costs haven't risen--and variable fuel costs are nonexistent.

All of these calculations ignore the potential cost of carbon regulations. A $20-per-tonne-CO2 price would add another penny to the cost of a coal kWh; the impact on natural gas generation would only be a third of a cent, while wind and nuclear would look even more attractive. Check out this brilliant spoof advertisement on the joys of coal; ironically, coal may not even be the lowest-cost option anymore!
Posted by Kevin Maas at 12:40 PM No comments: 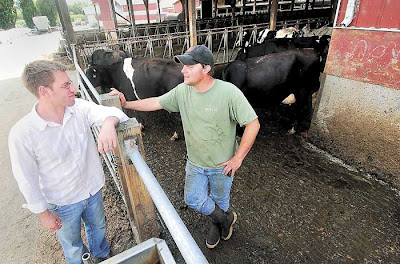 The Skagit Valley Herald ran a front-page story on Sunday that finally linked our project with another issue--proposed public (PUD) ownership of the county's electrical system; the first few paragraphs of overview are available online (with the more in-depth section unfortunately limited to subscribers only).

Our local public utility district has pitched its bid to take over the electrical system as a win-win initiative that will cut power bills while also defying Puget Sound Energy's plan to sell itself to Australian investors. Almost as an afterthought, PUD leaders also claimed on several occasions that they would be better supporters of green power as well.

I detailed our doubts on PUD support for green power in a March posting; more recently, we have been attending public forums where we have continued to contrast Puget Sound Energy's proven record on renewable energy with the less-enthusiastic support from government-run utilities, most notably Snohomish County PUD. Almost everyone likes the idea of local renewable energy, but we still don't seem to have convinced the pro-PUD side to grapple with the green power reality--it's not free, and developers don't start projects just based on nice words.

Local renewable energy simply does not happen without active, tangible, and bankable utility support. We have been working closely with Puget Sound Energy's green power team for almost a year and a half; they offer a regulator-approved contract that will pay about eight cents for every kilowatt-hour we will produce between now and 2018. This is the sort of support that convinced Shorebank Pacific to make a large loan commitment for our project; only at this level of support can anyone justify investing millions of dollars in a manure digester. For the sake of energy consumers, farmers, and local economies, we hope the Northwest's utilities will all follow PSE's lead and take clear action in support of green power.
Posted by Kevin Maas at 9:50 PM No comments: I noticed an article in E--The Environmental Magazine last month called "Meat of the Matter", focusing on the global-warming impacts of the livestock industry. Oddly, while the article brought out a lot of numbers it did not include a single photograph of any disturbing meat-animal production facilities (like the feedlot above). Rather, "E" chose to include several pictures of cute Holstein dairy calves. The magazine may be trying to keep the visual material light, or it might be kicking off a broad campaign against all farmers with cattle, or perhaps obtaining stock photos was easiest for Holsteins. Whatever the reason, I need to respond to the implication that dairy cows (and their care) are no different than the beef cow industry.

It is a fact that Americans eat vast quantities of meat, and this leads to the butchering of about 30-35 million cows a year; more red meat slaughter data than you'll ever need is found here. About three-quarters of these cows were raised for the sole purpose of becoming meat, and those in the beef business use breeds like Herefords, Angus, or Limousin. Beef cattle often spend the first part of their lives on grass, but almost all of them stand in feedlots for their final few months. Feedlots push grain through their cattle and move them on to the slaughterhouse when they are 15-20 months old. Once again, about 75% of our beef comes from cows raised with the specific goal of turning them into steaks.

Dairy cows, in contrast, make up a tiny fraction of our hamburger supply--about seven percent. Holsteins are raised with the goal of producing milk for many years; some of them don't produce very effectively and are eventually sold for meat, but every dairy cow at least gets a chance to have a calf and live to a minimum age of three. The average Holstein lives about five years, and they do so far more naturally than beef cows.

One of the accusations leveled at the livestock industry is that it feeds vast quantities of grain that could be better used to feed people. While this may be justified for beef producers, dairy cows eat diets consisting mostly of forage--various grasses, chopped green corn, and hay. This diet matches up much better with their digestive systems than grain, and forages also require much less work to grow. Since dairy cows need to chew their cud in order to convert all that forage into energy, farmers make sure that they are comfortable enough to spend at least a third of their time lying down and "ruminating". Beef cattle that eat mostly grain don't chew much cud, and thus their comfort becomes much less of a bottom-line issue for the meat industry--witness the feedlots of the southern plains.

One final question: if we admit that some animal protein belongs in our diets, is dairy any more efficient at supplying it than beef? To start, meat averages about one-quarter protein by weight, while milk is a bit more than 3%. Slaughtering a beef cow yields about 800 pounds of meat, while milking a dairy cow for three years produces at least 60,000 pounds of milk. So dedicated beef production results in 200 pounds of protein per animal, while dairy production results in almost ten times as much.

So, don't blame the iconic black-and-white dairy breed for the hundred million other cows that exist solely to feed America's hunger for beef. Don't blame dairy farmers for the inefficient use of grain to get beef cows to slaughter weight quickly. And finally, don't blame dairy farms for methane emissions from manure--they have been leading the way in adopting anaerobic manure digesters, and the farms of Skagit County will soon be among them!
Posted by Kevin Maas at 4:09 PM No comments: