Time to read the directions 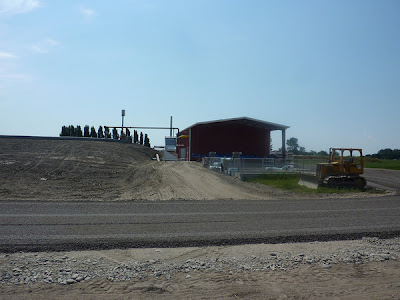 As I write this, Andgar is setting the last major pieces of equipment at the Rexville digester; the stainless-steel rectangle in the middle of the photo is a "separator" which--as its name suggests will separate fiber out of the processed digester effluent. We have a full tank of manure; we'll start taking fresh manure next week, when the tank will be warmed closer to its final 100-degree operating temperature. We have also given notice--under brand-new state regulations--that we intend to start mixing food-processing waste with the manure to further delight our resident bacteria; if you have some pre-consumer food waste that is currently being composted or landfilled, contact us! (farmpowernw[at]gmail.com)

Just in case you thought we were sitting around waiting for the manure to warm up, here are two stories out of Whatcom County--home to more dairy cows than all other counties in Western Washington combined. Articles in both the Bellingham Herald and the Bellingham Business Journal highlighted the value of green energy in driving economic development during this stubbornly-persistent recession. By tapping the power of manure, we hope to play a role in local economies throughout Western Washington.
Posted by Kevin Maas at 2:18 PM No comments:

The digester finally gets dirty 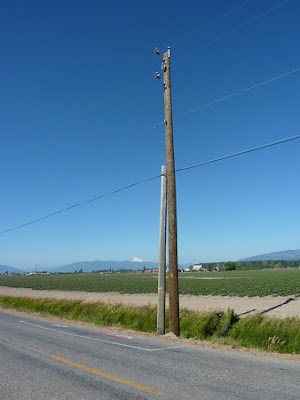 On the hottest day so far this year, we're taking 1.1 million gallons of stored manure out of the neighboring lagoon and filling our digester; we are finally starting to cut methane emissions (at 93 degrees Fahrenheit, those bacteria are definitely active). Fresher manure will be added during the next month, with electricity production beginning during that time. The picture is of one of the newly-installed power poles running along the road for almost two miles north of the project; the old pole still stands, just with its top sawed off. It's been almost two and a half years, but we're almost there.
Posted by Kevin Maas at 10:08 AM No comments: 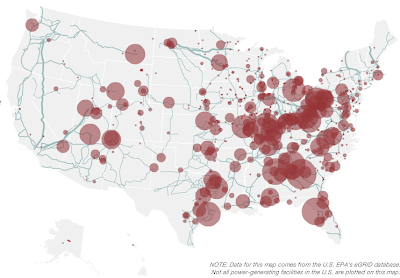 NPR put out a spectacularly information-dense electricity map several months ago. You can get to the image above by choosing the "Power Plants" tab and then selecting coal; the circles represent the amount of electricity produced by each plant. Due to varying technology, the amount of coal burned or the level of emissions per unit of electricity can vary widely for power plants. The "Power Plants" map is less accurate for some other sources; sometimes the web of ownership for wind farms or cogeneration facilities gets pretty tangled, but for coal and nuclear this is an amazing resource.
Posted by Kevin Maas at 12:58 PM No comments: 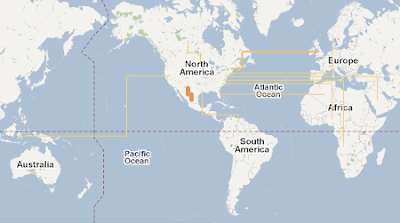 Amory Lovins' Rocky Mountain Institute built this historical oil imports map that follows the sources of our petroleum through the events of the last thirty-five years. The image above is from early 1983, when a combination of high prices, recession, and new Alaskan production had driven oil imports back below where they had been a decade earlier (less than three million barrels per day). Better yet, most of non-domestic oil came from Mexico at that point. The picture today looks bleaker; check it out, and remember that current U.S. production is about five million barrels per day.
Posted by Kevin Maas at 6:10 PM No comments:

Don't bet against the wind

During the energy price spike in the summer of 2008, wind power looked poised to change the world; capacity expansion set records and and billionaire T. Boone Pickens proposed wind as the key to independence from imported oil. Less than a year later, wind installations are falling off and the "Pickens Plan" has stalled.

But I wouldn't start betting against the wind industry yet. Steady technological progress means that turbines can produce more efficiently at more locations than ever. The map below shows how average wind speeds in otherwise-unimpressive Indiana increase for higher turbine mountings--50 meter hub heights were typical in the 1990s, 70 meters after the year 2000, but 100 meters will be common next year. At that height, the entire northern half of the state becomes economical. 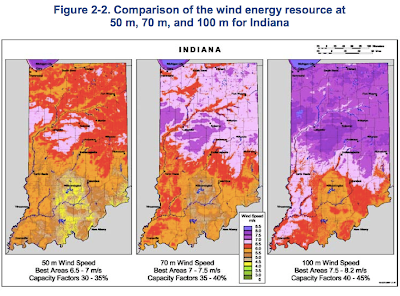 And more advanced turbines ensure the economics; recently-introduced designs for lower-speed onshore wind regimes include the Vestas V100 (1.8MW), Acciona AW-116/3000 (3MW), and the Siemens SWT-2.3-101 (2.3MW). These turbines are scaled-up versions of proven generators with blade diameters of one hundred meters or more. The wind industry is likely to see similar conditions to natural gas--an essentially limitless resource constrained primarily by economics. Like horizontal drilling in shale gas formations, the new "superturbines" will be able to generate power across vast swathes of the country, but they will only be built when electricity prices rise above a certain floor.

Federal incentives and emerging carbon restrictions will likely push the wind industry back to record levels in the next year or two. We will probably be surprised how easily wind meets one ambitious 20%-by-2030 goal.
Posted by Kevin Maas at 9:46 PM No comments: 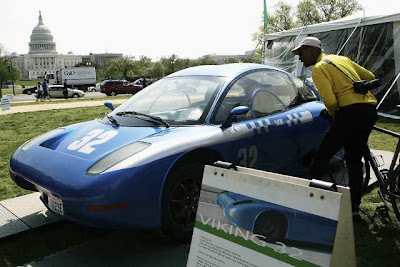 A half-hour north of us in Bellingham, students at Western Washington University's Vehicle Research Institute are working on one potential transportation future. Several years ago, they built Viking 32, a hybrid-electric sports car fueled by compressed biogas from the nearby VanderHaak anaerobic digester.

Next, the team plans to scale up the biogas-filtering system to provide fuel for buses. In rough terms, the annual biogas yield from one cow's manure is equal to 150 gallons of diesel, so there's definitely a transportation opportunity. The WWU students will primarily be working through other issues, such as cleaning and pressurizing the gas economically. Overall, society will have to decide when to embrace compressed natural gas as a vehicle fuel.
Posted by Kevin Maas at 5:18 PM No comments:

Coal, it keeps on rollin' 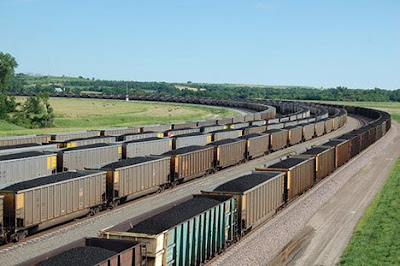 Washington state gets most of its electricity from hydroelectric dams and hosts only one medium-sized coal plant. But recently I began to notice trainloads of coal rolling north through my hometown of Mount Vernon, a unwelcome reminder of how the rest of the world gets its power. These occasional trains bring coal from the American interior (probably Wyoming) to Vancouver, BC, where--along with plenty of coal from Alberta--it is shipped to Asian markets.

The picture above shows trains loading in the legendary Powder River Basin, where Montana and Wyoming host the world's largest coal mines. One trainload of coal can move up to 15,000 tons; if this is lower-energy Powder River Basin coal, it will add roughly 25,000 tons of carbon dioxide to the atmosphere when burned (and, arguably just as disturbing, about two pounds of mercury). Each day, some seventy trains leave the Powder River mines.

The sheer scale of this movement is fascinating; I enjoyed a series of stories on coal trains by John McPhee that first appeared in the New Yorker and then became part of a book. But it's also daunting to those in the renewable-energy and greenhouse-gas-reduction worlds; for example, our first digester will have to run for almost three years to offset the emissions from just one coal train.

While we as a nation don't seem to have the political will to pull coal back from supplying half of our electricity, energy markets are giving us a bit of hope. The Energy Information Administration provides weekly updates on coal markets, and coal production has dropped somewhat this spring--likely due to pressure from sustained low natural gas prices. We have a nearly-incomprehensible amount of work to do before replacing coal, but--as I said in an earlier post--shifting to natural gas won't hurt.
Posted by Kevin Maas at 12:06 PM No comments: 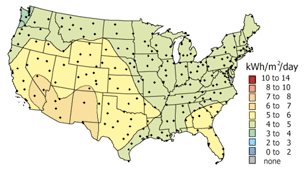 Previously-unknown Teanaway Solar Reserve appeared with a splash last week, announcing plans to build a 75MW photovoltaic project in central Washington. So far, they have a location and a lot of frothy press; what's not as clear is whether their business model extends much further.

The map above shows that the country's best solar potential lies in the Southwest; not only do these areas get lots of sun, but their highest electrical demand--air-conditioning--occurs when solar energy is also near its peak. In comparison, other parts of the country get less sun and need the most power during the dark days of winter. So it's not surprising that California has three times more solar power capacity than the rest of the country combined.

This doesn't mean that photovoltaic (PV) panels don't work in large swathes of the country; they do, but they are a money-losing proposition. An article on the economics of solar power lays out the range of yield on investment for a project in an area--like Central Washington--that gets about 25% less sun than the Southwest: about 1,500kWh per year per kW of panels installed.

The 1,500kWh/kWp in the chart below means that the PV panels produce 17.1% of the power they could if the sun shown day and night, year round (this is a fair comparison, since most other energy technologies don't depend directly on the sun and produce at 80-90% of their annual potential, including renewables such as biomass and geothermal). Federal incentives extended during the past year cut the cost to build by about half, so it's not unreasonable to assume a project like Teanaway Solar could complete a project at a net price of only $3.00/watt peak. The problem is that a large solar project in the Northwest will likely have to sell its power for many years no more than $0.10/kWh. At that rate, the chart shows a yield on money invested of only 5%--and out of this must come taxes, insurance, and maintenance before any of it can be used to repay lenders or investors. 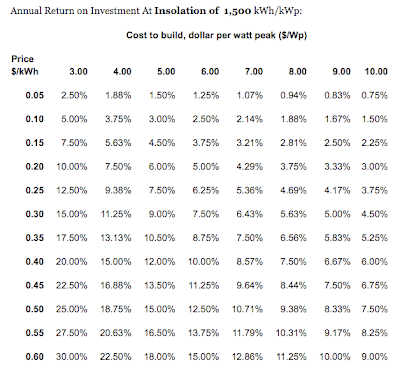 Since investors and bankers typically don't commit large sums of money for near-zero yields, the Teanaway Solar promoters must believe that renewable energy markets will shift massively in the future--perhaps a tripling of electricity prices, even more lucrative government incentives, or an unprecendented fall in the price of PV technology. That isn't a very good business plan. It fell to the pro-business-as-usual Washington Policy Center to point out the obvious problems with the plan, including that the project would cost several times more than even nearby wind installations and that other high-hype/shaky-economics energy showpieces haven't turned out well.

I know quite a few good people who have been working hard on solar for many years; I'm just hoping a near-inevitable reversal for Teanaway Solar doesn't reflect badly on the wider regional industry. And I surely hope this doesn't give the remaining detractors of renewable energy more ammunition--the next couple years aren't going to be any easier for green power, so this is my marker to help protect the brand. Let's under-promise and over-deliver; we don't have to be like California--we can have our own party.
Posted by Kevin Maas at 2:29 PM No comments:

The Climate Trust, a pioneering non-profit based in Portland, is buying our carbon offsets. Their initial interest helped launch Farm Power back in 2007, and we finally negotiated a deal with them in December. Now the Climate Trust has a beautiful new website with a page that features our first project! The page includes a link to the registry that has our project documents, a big step forward in transparency for those who really want to know where their offsets come from. Of course, we believe the best transparency is to have accessible projects that can be visited by interested stakeholders; we're having yet another tour next Saturday if you're interested.
Posted by Kevin Maas at 6:11 PM No comments:

We've been working with Shorebank Pacific for almost two years, and their money started entering our first digester project earlier this spring. Last week, the bank finally issued a press release. We got a brief mention in the Sustainable Industries Journal version, which focused more on the other Skagit County company who closed a deal with Shorebank. Renewable energy finance hasn't gotten any easier recently, so we're thrilled to be working with this green banking pioneer.
Posted by Kevin Maas at 7:06 PM No comments: