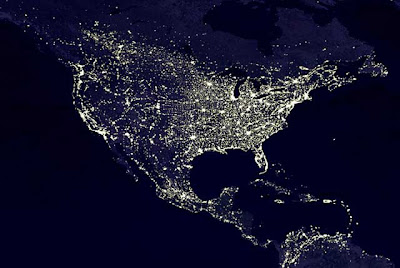 During the past few months, the federal government has given about two billion dollars to completed renewable energy projects and provided construction grants (through the Department of Energy or state energy programs) for several billion dollars more. These are impressive totals, and there is more to come. Unfortunately, the stimulus package is only making a tiny down payment on the enormous cost of overhauling our energy system.
Americans use energy in two primary forms: liquid fuels and electricity. Expensive conversion equipment allows raw energy sources such as petroleum and coal to be refined into these two forms of energy. For a variety of reasons, some of the conversion equipment we have installed over the past half-century is becoming obsolete and will have to be replaced soon--but at a staggering cost. I estimate the energy overhaul during the next two decades will cost about a trillion dollars.
Let's look at electricity first. The United States uses about 4,000,000 gigawatt-hours of electricity annually (while we're talking about trillions, when converted into electric-bill kilowatt-hours that number becomes four trillion kWh); coal-fired power plants have typically produced about half of that amount. The good news is that electricity usage dropped slightly each of the past two years, and the portion generated by coal dropped as well. The bad news is that we're going to have to start cutting back on coal-fired generation for three main reasons:
I expect that half our coal plants will still be running twenty years from now, but we still have to replace a huge amount of equipment. Let's assume that electricity demand remains stable (not at all assured, with recession pulling one direction and electrification--primarily of transportation and heating--pulling the other); we still have to build enough power plants to supply a trillion kWh a year. Since a year consists of 8760 hours, it would take new power plants rated at more than 120 million kW to produce this much electricity. Natural gas plants are the cheapest capacity currently on the market, but building plants capable of running most of the year on renewable fuel (like wood biomass or wind) costs around $5,000 per average kilowatt. Altogether, this partial overhaul of our electricity generation system will cost over $600 billion.
Now let's look at liquid fuels. The United States uses about 200 billion gallons of gasoline and diesel each year. All of this is refined from petroleum, and we import the majority of the petroleum. As with electricity, consumption of liquid fuels has dropped slightly during the past two years, but the bad news is similar: we are going to have to cut back on petroleum refining for three reasons:
Industry measures its production in forty-two gallon barrels per day; again, this production currently takes place at 150 refineries, billion-dollar installations with an average capacity of over 100,000 barrels per day. Liquid fuels can be produced from other carbon/hydrogen sources, ranging from natural gas to wood waste, using processes that can differ substantially from oil refining and require very specialized equipment. 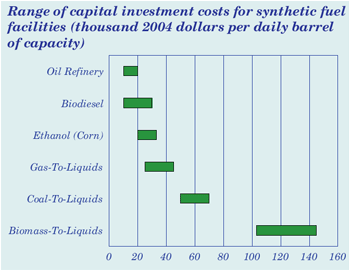 Let's assume that fuel demand drops, but we still have replace almost half of the lower demand--six million barrels per day of transportation fuels and other petroleum-replacement products. The EIA graph above shows that equipment for refining crude oil is the cheaper than any alternatives--just one of the reasons why there is twenty times more oil refinery capacity than corn ethanol capacity, the next largest liquid fuel source.

The cost of equipment varies inversely with the cost of its feedstock; natural gas is quite expensive, while some biomass can be free or even better. I expect we'll even have some coal-to-liquids conversion, using the extra feedstock freed up by closing the less efficient half of the coal-fired electrical generators. The coal-to-liquids plant cost of $60,000 per barrel offers a good average between the other technologies; at this price, the partial overhaul of our liquid fuel system production system costs almost $400 billion.
So, a cool trillion dollars buys the United States an energy capacity similar to today's but cuts coal and oil consumption by half. It's not complete energy independence and many facilities still require purchased feedstocks. The most interesting question, though, is whether we can afford this trillion-dollar overhaul; the United States has burned through close to that amount of stimulus funding without having a serious impact on energy infrastructure. Is there much hope that we'll focus our efforts better in the future?
Posted by Kevin Maas at 4:14 PM