A Century of Delicious Dairy Products 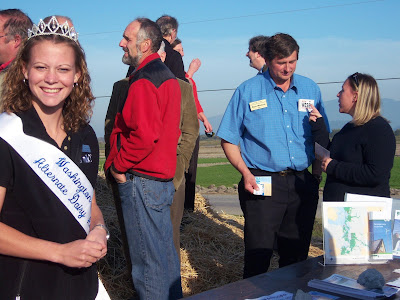 I love the classic dairy images in this picture from our groundbreaking: in the middle are two dairy farmers dressed up for the occasion, and on the right is a farm inspector from the state department of agriculture. At left is our local Dairy Ambassador, a high school senior chosen each year to lead outreach efforts for the Washington State Dairy Women. Over the years, many Dairy Ambassadors have been drawn from the dairy-family-heavy school that we attended, so it was great to have the current representative at this key Farm Power event.

The dairy industry has had to work increasingly hard to keep milk in the diets of consumers, using everything from Dairy Ambassadors to the "Got Milk?" campaign. Once literally at the center of life for most of the population, milk is now competing with a dizzying array of other products for attention on supermarket shelves. Per-capita consumption of all dairy products has stabilized during the past fewer decades but remains lower during the first half of the 20th century--down about a quarter. The average American now drinks a bit less than 25 gallons of milk a year, about a third less than at the mid-century average. Butter consumption has fallen even more steeply; during the first few decades of the century, Americans were each enjoying almost 20 pounds of butter annually (more than half of all milk was consumed in this form). Now butter consumption has fallen by 75% (and has, unhappily for our arteries, been more than replaced by margarine and other fats).

Fortunately for dairy farmers, cheese and ice-cream consumption have moved in the opposite direction: ice cream exploded in popularity after World War II, and moderation since then has been more than offset by increased interest in other frozen dairy products. The biggest story is cheese--Americans eat almost ten times as much cheese as they did a century ago. Lest anyone attempt to blame this for American health problems, it is important to note that our cheese consumption still noticeably lags many healthy European countries. For example, the French not only enjoy more fluid milk and butter than Americans--they also eat 50% more cheese than we do!

Milk plays an important role in many food cultures, and we hope that Americans continue to appreciate the delicious variety of foods provided by our dairy farmers. Milk fits easily into a healthy lifestyle and links consumers to a sustainable local food production system. Milk drinkers should be asking where a store's dairy products come from--we'll be proud to tell them when their cheese, sour cream, and butter comes from Western Washington farms.
Posted by Kevin Maas at 12:31 PM No comments: 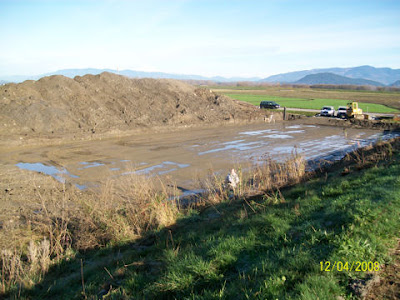 For anyone wondering whether our groundbreaking was ceremonial or real, the answer can be found on on the Farm Power website or on a photo page set up by one of our supporters. We didn't waste any time starting construction; Western Washington will keep getting wetter until sometime next spring, so now is as good a time as any in the next six months.

The concrete forms will start being set next week, and work will continue as the weather permits. Pumps are set up to keep water from soaking the site too badly. Once the floor is poured, work on the walls can proceed without getting as muddy. Check in with us before stopping by--it is a work site with heavy equipment, so visitors need hard hats and someone to escort them, but we'd be happy to show you around.
Posted by Kevin Maas at 5:39 PM No comments: