I will be at the historic Lincoln Theatre in Mount Vernon this Thursday evening (March 5th) for Renewable Energy night. The 56-minute documentary "Kilowatt Ours" will be shown at 7pm, followed by a panel including yours truly. Other panelists are wind developers and energy efficiency experts. This is about as local as we can get--gathering with others from Skagit County concerned about sustainability; if you are able, please join us.
Posted by Kevin Maas at 7:42 PM No comments: 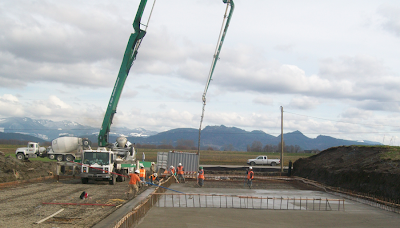 Last week, Snohomish County PUD announced it had agreed to buy power from an Oregon wind farm. This "Hay Canyon" purchase comes several months after a similarly-sized deal for power from a project with a similarly-bland name, Wheat Field, also located in north-central Oregon.

Why would a citizen-owned Washington utility look south of the Columbia River for renewable energy? The answer is simple: subsidies. Oregon provides a tax credit of up to $10 million to renewable energy projects built in the state; although each of the wind farms mentioned above will cost around $200 million to build, the credit must make Oregon's electricity slightly cheaper than unsubsidized Washington green power.

Not everyone is thrilled about the attractiveness of Oregon's subsidies; some residents argue against providing benefits to out-of-state energy buyers. What is undeniable, however, is that building renewable energy projects in this economy makes a huge difference to workers and communities nearby. A 100-MW wind project like Hay Canyon or Wheat Field typically provides over a hundred jobs during construction, adds a dozen permanent maintenance positions, and pays a half-million dollars a year in property taxes. For the people working these jobs and the counties gaining tax revenue, location matters.

We finally started pouring concrete on Thursday. Our contractor handles materials purchasing, but confirmation calls from local suppliers show the impact Farm Power spending has. Drivers at Skagit Ready Mix care very much that this digester is being built here rather than Oregon; employees of Mount Vernon Building Supply probably feel the same way. Good policy should find a way to encourage both the purchase of green power and its production as close to home as possible.
Posted by Kevin Maas at 9:48 PM No comments: