The Heart of a Digester 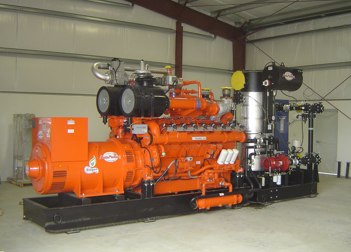 We hosted another great tour today at our site; as usual, the highlight was our 750kW engine-generator set. The bright orange Guascor (pronounced "wah-score" here and probably different yet again in its home Basque region) has given us quite a few attractive pictures (most recently, with Daryl in a small local newspaper); in person, the massive machine is even more impressive. A genset gives a digester its economic reason for existence--our ten-year contract to sell electricity to Puget Sound Energy secures the entire project. In addition, the genset will produce all the hot water we need to keep the manure in the digester warm. Our contractor continues to install all the pipes and wires needed to be operational in August. Watch our website--we'll probably have another tour in July.
Posted by Kevin Maas at 7:15 PM No comments:

Back in the public eye 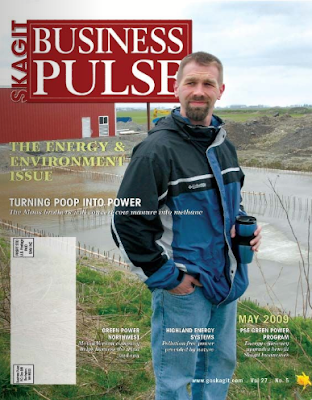 This past winter, the occasional news about Farm Power involved our legislative efforts; now, with the coming of spring, our public profile has been increasing. Our local newspaper's monthly business magazine ran a story on us in their April issue (page four of the online page-turning format) that quite a few people noticed (and with a cover photo like the one above, who wouldn't?!).

A few weeks later, we received a permit from the state to offer Farm Power equity directly to middle-class investors--a pretty unique type of fundraising. We started running advertisements in newspapers like the one below and holding public meetings. The poster promotes our meeting in Bellingham on Thursday June 25th, but the full schedule is available on our website. We've met new people from across the Northwest, interested in the investment potential at the intersection of agriculture and energy.

Since pictures can never tell the whole story, we have also given one public tour of o 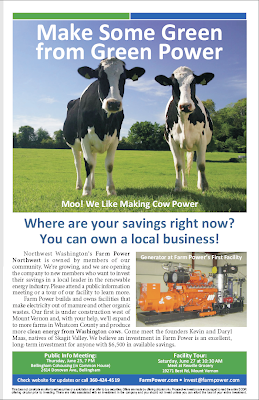 ur rapidly-nearing-completion Rexville project; another tour is scheduled for this Saturday, June 27th. Our 750kW engine-generator set looks even more impressive in person. We expect to start filling the digester with manure in less than a month, so come by while things are still clean and new--we'll be meeting at the Rexville Grocery at 10:30am (you can grab a coffee first) and then driving over together. We hope to see you there!
Posted by Kevin Maas at 9:00 AM No comments: 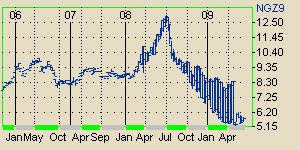 Of all the fossil fuels, natural gas is the cleanest and the least carbon-intensive. Many projections show its usage continuing to increase in coming years even as oil production peaks and climate concerns reduce coal consumption. Unfortunately, proven natural gas reserves will only last a few decades at expected production rates. If only there was more of it around....

The chart above shows trading prices for the December 2009 futures contract. For three years, the market believed that early-winter natural gas was worth somewhere around $9.00 per thousand cubic feet (or MMbtu). Prices spiked last summer and then collapsed; although oil has recovered strongly since then, natural gas remains near its lows, with the market now saying early-winter gas is worth only about $6.00/MMbtu. Something has definitely changed.

That something is unconventional gas reserves. American natural gas production surged last year as increasing numbers of shale gas wells came online. New technology allows drilling in rock previously too impermeable to yield any gas, suddenly changing everyone's calculations around natural gas reserves. New estimates predict that the United States, rather than facing slow but steady production decline, might have enough gas to produce for the rest of the century--a quiet but hugely-important story for the petroleum industry.

This article looks at the international implications; although the author's numbers appear to be off by an order of magnitude, unlocking unconventional gas would completely change Europe's energy picture. But not yet: "while there is no active shale development project outside the US, testing is continuing on the commercial viability of some shales."

More natural gas would mean cheaper natural gas, reducing the appeal of coal; this would be good news from almost every angle. Producing electricity by burning natural gas rather than coal cuts CO2 emissions by roughly 60% and emissions of much nastier stuff (like mercury) to practically nothing. The challenge of replacing our coal-dependent electrical-generation capacity is so enormous that more plentiful gas reserves could actually ensure that natural gas fulfills its hoped-for promise as a bridge fuel to a sustainable future. Compared to many other scenarios, a 21st century fueled by natural gas is one I could handle.
Posted by Kevin Maas at 10:13 AM No comments:

Where is our green power? 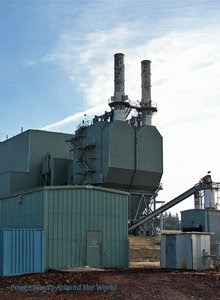 In my experience, people often unknowingly divide green power sources into types they've seen (solar, or sometimes wind) and more exotic types they'd like to see (tidal, for example). The Renewable Northwest Project list of green power sites
follows this pattern; it includes wind, solar, geothermal, and even some rather speculative wave/tidal projects, but it does not includes any biomass. And why should it? Biomass projects are not as common as solar, not as majestic as wind, and not as futuristic as tidal.

In short, waste-to-energy does not photograph well. The picture above is a 28MW wood-burning plant that also provides steam to a lumber mill. Similar plants can run on natural gas or coal, making distinguishing green energy difficult. However, cogeneration of electricity and steam is one of the most efficient processes we've invented, and burning waste for "combined heat and power" (or CHP, another name for cogeneration) becomes the very definition of sustainability.

Well, if simply being industrial-looking is acceptable for green energy, perhaps people don't notice cogeneration because it's relatively rare. Well, let's compare it to wind. According to the American Wind Energy Association project list, Washington currently has 1479MW of wind turbines at ten separate sites; Oregon has a few less turbines but a couple more sites. Estimated energy production is about as much as a large coal-fired power plant, but less predictable. A much less-well-known database of combined heat and power plants gives up its numbers grudgingly, but it shows that Washington is home to almost 300MW of wood-burning cogeneration plants while Oregon hosts 400MW, spread all across the two states supplying heat to about thirty lumber mills and paper plants. Although these green electricity generators produce only about half as much power each year as the Northwest's wind turbines, the CHP facilities are much more likely to be running when the electricity is most needed.

So combined heat and power is more widely distributed than wind, more reliable, AND super-sustainable; to its detriment, the technology can't claim to be new--some of these plants have been producing electricity for decades. So while solar photovoltaic gets tremendous attention along with enormous subsidies, cogeneration keeps producing a hundred times more power at competitive prices.

I hope that the lack of visibility doesn't keep people from considering the potential of waste-burning CHP for non-timber-industry applications like district heating. This has the potential to scale up rapidly and make a difference much more quickly than newer technologies; green power has been coming from Northwest forests for years, and I hope it comes to a neighborhood near you soon.
Posted by Kevin Maas at 2:14 PM 1 comment:

Wait 'til the farmers see me in my Prius! 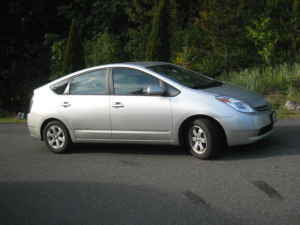 I just bought a 2004 Toyota Prius. It has little dings around the edges, but it still runs well and gets over 50mpg. Replacing my long-serving 1988 Honda Accord wasn't easy, but the Prius looks to be up to the task!

When the warranty expires in about six months, I'd like to try converting the Prius to a plug-in electric vehicle (PHEV). Unfortunately, battery packs like the Hymotion cost about $10,000. That price requires some serious reflection on my long-term driving plans. If I drive the PHEV Prius into the ground, perhaps putting another 170,000 miles on it over the next eleven years, I might look back from the year 2020 and say the conversion was worth it....let's do some calculations and try to find out.

First, the basics on PHEVs: they make a lot of sense for shorter trips, either allowing all-electric driving for 10-20 miles at lower speeds or doubling the already hig 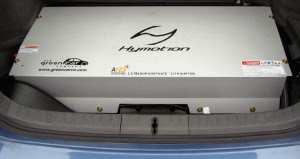 h gas mileage of a Prius for faster 30-40 mile drives. Automakers keep talking about selling new plug-in hybrids, but since cars like the Chevy Volt remain in the uncertain future, current examples almost all feature battery conversions of a Prius. These cars must be plugged in all night for a full charge, but this can be done at any outlet and having the gas engine for backup means PHEVs won't leave their drivers stranded by the side of the road when the batteries run dry.

Much of my driving consists of 10-20 mile trips; I only get on the freeway to leave the county about once a week. I'm going to assume that over half of my miles would be battery-powered, a total of 8,000 miles a year (for example, a round trip from my house to the Rexville digester site is about sixteen miles and can be done on back roads driving less than 35mph--if I'm the one who has to visit the project every day, I would put on almost 6,000 all-electric miles a year). Going battery-only on some trips (and battery-assist on many more) will save about three gallons of gasoline a week compared to just driving an unmodified Prius while adding roughly 30kWh to my power bill. At current prices, I'd save about six dollars a week in fuel costs.

I expect the price of both gasoline and electricity to be higher in 2020. Some of the inflation will likely be due to greenhouse-gas regulation, which makes exact comparison difficult. But let's just assume that after subtracting any carbon tax, gasoline costs $5.00/gallon and retail electricity costs $0.13/kWh. In 2020, I'd be saving about eleven dollars a week in fuel costs; over the course of eleven years, I would have saved a total of $5,000 dollars. That's about half the cost of the PHEV conversion.

I subtracted the fuel carbon cost above so I could fairly estimate the real greenhouse-gas savings from driving a PHEV; it looks like I'll have to consider the other half of the plug-in cost as a contribution to slowing climate change. By 2020, my gasoline reduction would be responsible for avoiding fourteen metric tons of carbon-dioxide emissions. Unfortunately, the calculations don't stop there. Since roughly half of Puget Sound Energy's electricity comes from burning fossil fuels, the new electricity I'll use for driving each year will add hundreds of pounds of CO2 emissions. My total net reduction in carbon-dioxide emissions is unlikely to exceed ten metric tons. Those are expensive tons; I'd pay about $500 per avoided ton of CO2!

PHEVs aren't going to save the world. The increased efficiency of electric driving pales in comparison to serious transporation solutions like commuter trains and better bus systems, while larger projects (like anaerobic manure digesters) can cut greenhouse-gas emissions much more quickly and economically. I hope the battery conversion kits come down in price; I may still get one if they don't. It's a subject that deserves plenty of reflection.
Posted by Kevin Maas at 4:54 PM 1 comment: