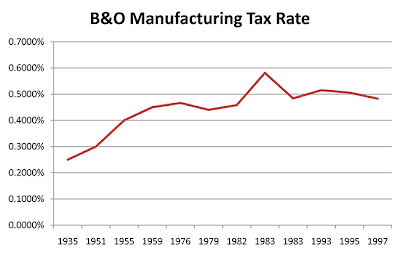 I send a check to the Washington State Department of Revenue yesterday; it covered the Business and Occupation (B&O) Tax we've been incurring since starting to produce electricity in August. Unlike the income tax charged by the federal government and many other states, the B&O tax is based on revenue rather than profit. The rate varies depending on the type of revenue (the chart above shows the rate for manufacturing; the rate for service businesses is much higher at 1.5%, while some types of food processors pay a rate as low as 0.138%). However, many in the business community hate this tax because it keeps on accruing right through a recession, even when losses are piling up.
A great history of Washington State taxes found here shows that we never intended to have this needs-blind tax--it was an emergency measure to raise money during the Great Depression after the state supreme court struck down a voter-approved income tax. Three-quarters of a century later, Washington remains one of a half-dozen states without an income tax (four more votes failed, most recently in 1975). The resulting reliance on property and especially sales taxes earns our state a special distinction: the most unequal tax structure in the nation.
Voters in Oregon just approved a hike in their income tax rates, but preemptive opposition immediately appeared against taking such measures here to fill the $2.6 billion state budget shortfall. So the Legislature will spend the next month struggling through more cuts, and I'll get ready to send another small check in three months--if nothing else, we at Farm Power are doing our part.
Posted by Kevin Maas at 7:56 AM No comments: 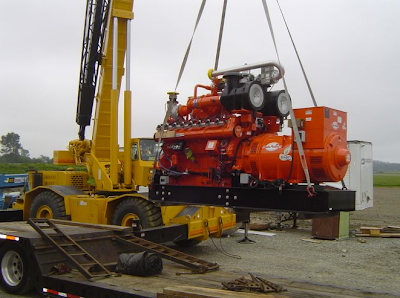 Our builder recently updated their webpage. The first part of the digester section features several photos from our project, but the Farm Power Rexville page has two dozen shots from various stages of construction and completion. One of my favorite shots is the delivery of our genset--it came halfway across the country on a truck and then moved the final one hundred feet to its resting place by crane (this was back in May 2009). Check out the rest of the Andgar website too--we hope to have another project listed there soon!

Posted by Kevin Maas at 9:43 AM No comments: