A gallon a day 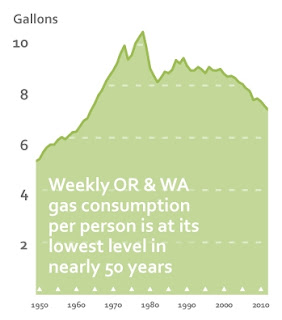 I recently ran across the latest gasoline-usage data for Washington and Oregon presented by the Sightline Institute.  The headline of the report was that consumption continues to decline; while ten gallons a week was normal in the 1970s, "during the average week in 2011, Washington residents consumed 7.3 gallons of gasoline per person. In Oregon, weekly gas consumption totaled 7.1 gallons per person...[this was the] lowest level since 1962—back when a gallon of gasoline cost 31 cents.  Similarly, per person gas consumption in Washington fell to its lowest level since 1965."

The trend is encouraging, primarily stemming from less driving.  "Annual vehicle mileage per capita has fallen by 13 percent over the last decade...it’s as if every driver left their car in the garage for a month and a half each year. These per-capita declines have offset population growth, leading to a virtual flat-lining of total driving on state roads for most of the last decade."  After substantial improvement in mileage in the 1980s, cars haven't gotten that much more efficient in recent years; since they continue to last longer, even new fuel-economy standards will take a long time to have an effect.  However, raw mileage reductions aren't over; "demographic trends provide good reason to believe that miles driven per capita will continue to fall. Once drivers hit the age of 45, they drive less."

When I checked my gasoline-purchasing records, I found that I too use at least a gallon of gasoline every day.  That means I buy six pounds of highly-concentrated liquid energy,  mix it with oxygen and combust it, producing about eighteen pounds of carbon dioxide, day after day. This energy is extracted as crude oil from Alaska or Alberta at great expense, transported to Northwest Washington, refined, and made available to me for about four dollars a gallon--a ridiculously low price relative to the amount of work the gasoline does moving my 3,000-pound car around, but adding up to billions of dollars a year as a cost to our region.  Hopefully, I can find some efficiencies and become a part of trend--that or just get older, when I will drive less too!